During the first years of His stay at Shirdi, Baba used to give some sort of a medicine  (traditional medicine given in Indian villages) to the sick people and had earned reputation as an village doctor. He continuously prayed God day and night. At a certain point of time He started giving Udi as the panacea for all maladies, physical ailments etc. some treatments given by Him were most unconventional.

At Shirdi while devotees took leave of Baba He gave the sacred ash of His dhuni (sacred fire) to the devotees as a gesture of His blessings. It conferred health, prosperity and freedom from anxiety and fear. Even today the sacred ash collected from perpetual fire at Shirdi is sure cure for all maladies – physical as well as mental. It works miraculously and graciously in the moments of distress and utter despair – as an unseen hand extended by Him.

The devotees either apply it on their forehead or take a pinch of it in the mouth or sometimes take it orally mixed with little water as medicine. It is more than proved that power of this sacred ash is far greater and reliable than any medical system developed by man so far. It is to be taken with genuine faith or earnest hope, and this works as the ultimate medicine. 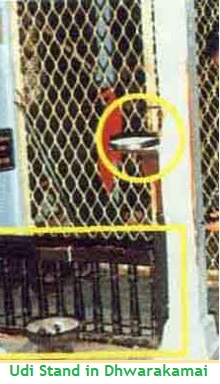