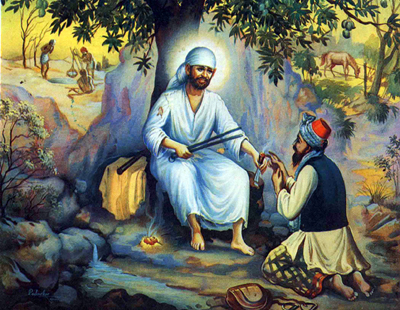 There is an interesting story of one of Baba’s many miracles. Chandpatil was once riding through the forest

when suddenly he felt an acute urge  to smoke. To his great dismay he found that he did not have the

wherewithal to ignite a fire to light his Chelum with. Seeing Sai Baba  seated under a tree, the rider

approached him for a match. Baba had  no matches, but just for thrusting the tongs nearly, he produced a

flame. The rider witnessing the miracle, realizes and  recongnises Baba’s divinestature and kneels to the Saint 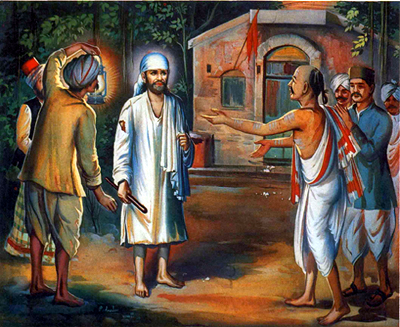 Within a very short time of Sai Baba’s arrival at Shirdi, the villagers pointing ot him called him ‘Sa’ – which being interpreted

in ‘God with us”. These simple folk also hailed him as an Avatar of the age. Thus, in a moment was resurrected the immortal 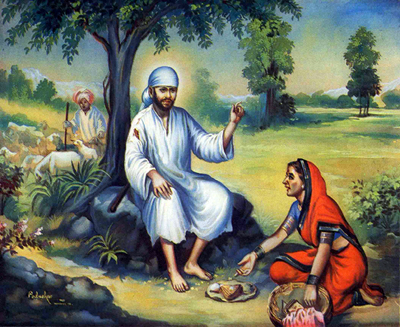 The hunger of a Guru’s heart for the love of his bhaktas is not sufficiently recognized. Here is one such instance of a

devotee’s burning love for the master. Baijabai daily sought out Baba in the forest where he lived in the early days, in order

to bring him food which she lovingly prepared for him. Baba raises his hand in a gesture of blessing and his eyes light up

with gratitude. The Guru has his needs and longings too, and this is an alluring facet of the Guru Bhakta relationship. 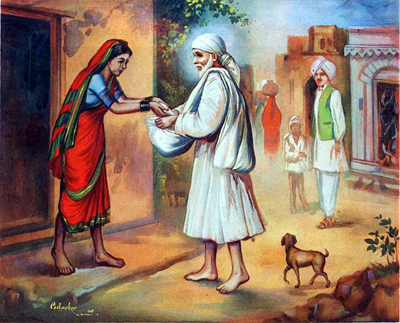 In the very beginning, Sai Baba was in the habit of going to a few houses in the neighbourhood to beg for food. At times

Baba would scold a grudging housewife by saying – “Mother you have so many Chapaties, so much rice and this or that

vegetable in your pots, why refuse a bit of food to a fakir”! This gentle chastisement and the accuracy of the strange fakir’s

prouncement would remove the veil of maya from these women who would then rush to put their all at his feet, as an as an 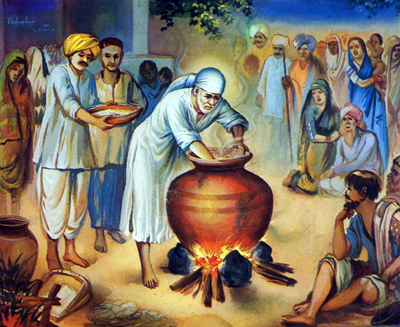 Sai Baba often cooked a hotch-potch of vegetables, rice and spices all mixed together in this ‘magic’ earthern pot. The food

that Baba made seemed to grow in abudncance and there was always enough for everyone. Verily, the touch of a

sat-purusha unlocks the storehouse of the Goddess Annapoorna’s unlimited resources. 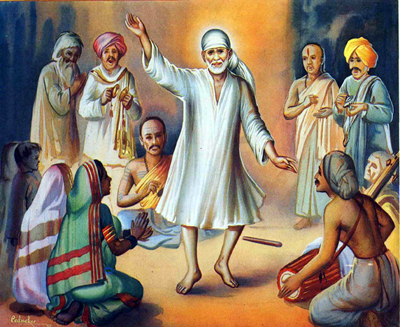 Sai Baba abandons himself to the mood of divine ecstasy through music. Like the lord of dancers Nataraja, Baba too loses

himself in the Cosmic dance, symbolizing the primal rhythmic energy of life. 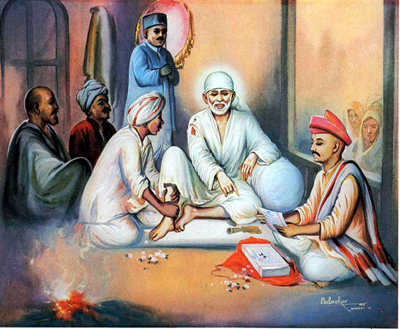 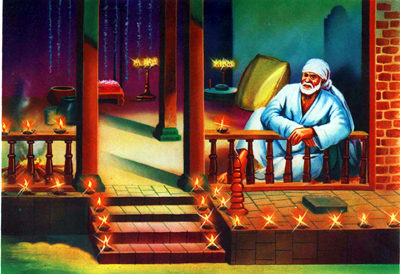 SAI BABA IN DARBAR IN DHWARAKAMAI 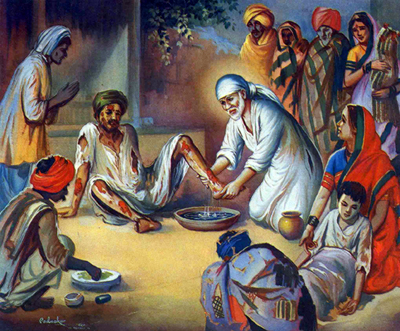 “They that are whole need not a physician, but they that are sick” Sai Baba’s profound love and compassion for suffering

humanity are manifested here, as he gently tends a lepers sores. 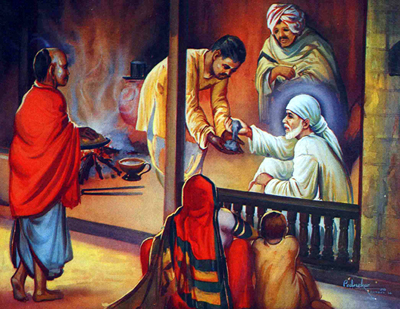 Sai Baba distributing the holy ‘udhi’ – the panacea for all troubles – to his bhaktas. ‘Udhi’ is the ash that drops from the holy

fire kindled by Baba a hundred years ago. The great master was wont to use this ash for healing the sick, thus investing the

udhi with great power by this gesture. Even now the sick and the unhappy alike are healed if they take this divine medicine 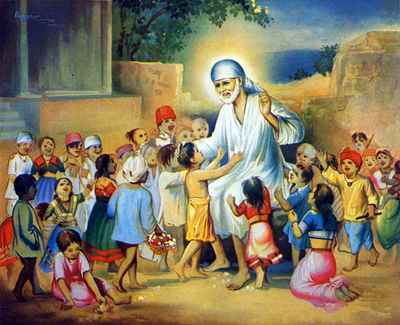 Shri Sai Baba was very found of children. He used to spend part of his day in playing, chit chatting or humouring with them. 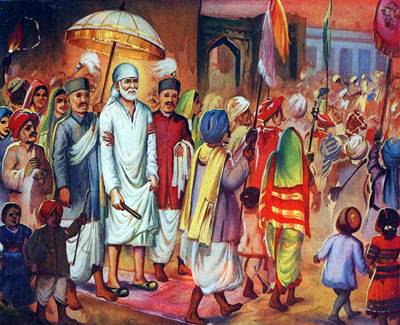 Sai Baba is going inprocession from the Dwarka Mayee to the Chavadi, according by this veteran devotees, Bhaktas thus

escorted Baba to his destination with all the ceremonial honours due to a king – for, was he not in fact the king of kings? 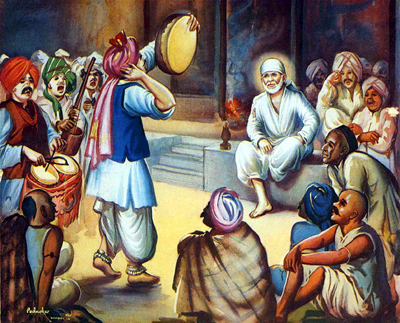 Here Sai Baba is seen sitting on the steps of the famous Dwara Mayee mosque at Shirdi, absorbed in the divine thraldom of

music. Baba’s appreciation of talent, and the warm encouragement he gave to those who had talent were priceless gifts

from his immeasurable divinity 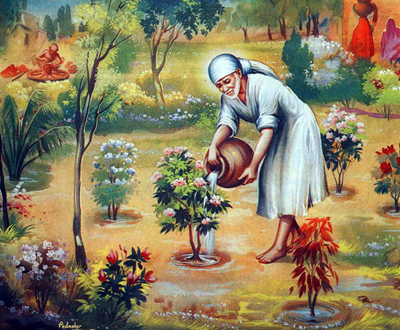 The Saint of Shirdi had ‘green’ fingers, for all that he sowed and planted would blossom forth into fruit and flower. Here the

divine gardener is seen tending and watering the plants in the Lendi Gardens. 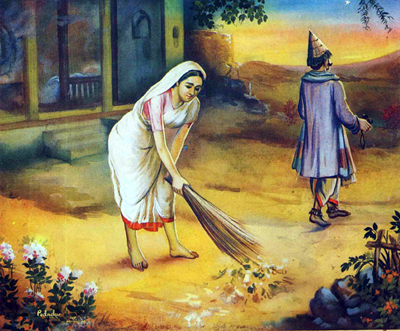 the ashram compound daily. This was her way of showing her adoration for her Master Sai Baba. 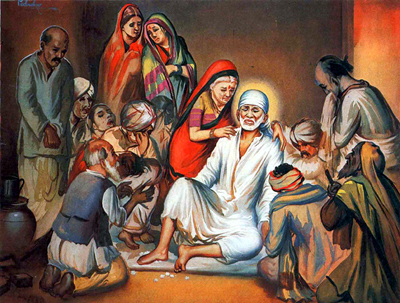 The 15th of October 1918 was a sorrowful and fateful day for the little village of Shirdi, for in the heavy hours of the noon,

the beloved Master suddenly breathed his last. Quietly and unobtrusively, Baba, gave up his body, and let his head fall

gently on the shoulders of a near disciple. The great “Avtar’s” glorious period of Messiahship, his self attotted labour of

love, came to an abrupt end. All the magic light seemed to have died out that erstwhile had given to thousands of seekers

desolation filled each heart. But not for long for, resurrection ever keeps pace with and outlives the foreces of death and

destruction. The great Avtar of Love and Compassion gave up his body so that his spirit may be resurrected in the hearts of

thousands of his ever growing bhaktas 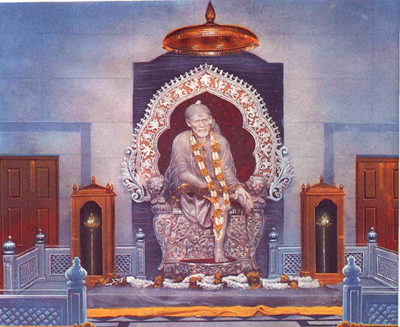